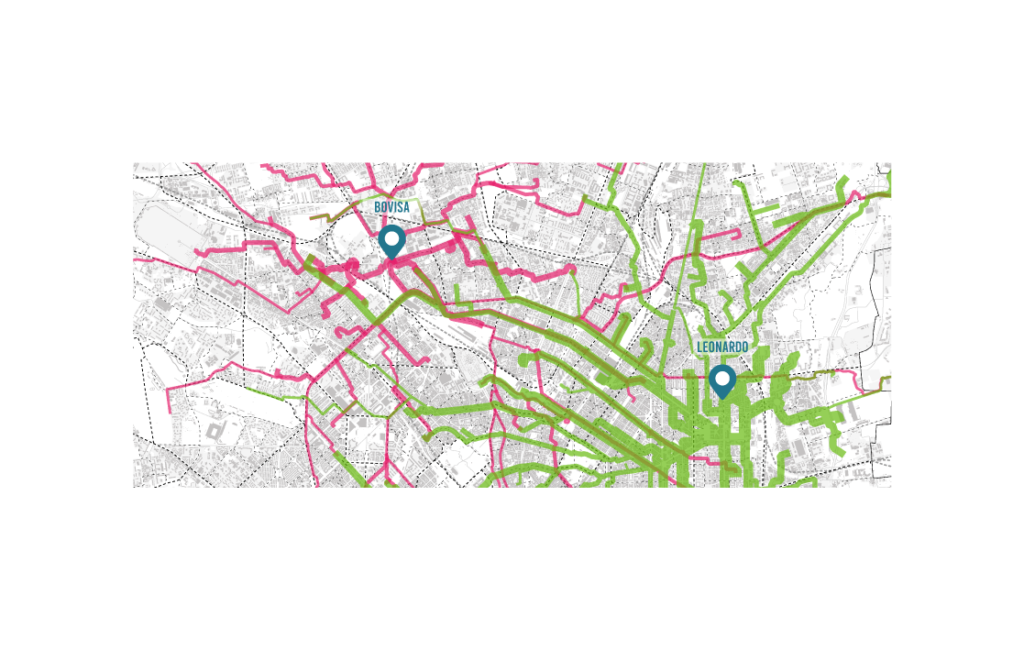 Among the actions implemented by the Sustainability Office of Politecnico di Milano, within the project Città Studi – Campus Sostenibile, the survey on the commuting habits of students and staff is the main source of data on mobility. Every two years, the whole population of the university (about 60.000 people in 7 campuses) is asked to describe their mobility pattern, contributing to the collection of useful data for planning and promoting sustainable mobility. The last questionnaire was administered in 2019 and reached a response rate close to 20%.

While the comprehensive analysis of survey results is still in progress, within the Covid-19 healthcare emergency actions promoted by Politecnico di Milano, a specific focus has been given to analyse bike trips towards the two main Politecnico Campuses (Leonardo and Bovisa). The purpose of this work is to better design and promote sustainable forms of mobility for Politecnico students and staff, reducing the use of cars and to relieve pressure on public transport in view of the next Academic year. We therefore present an outcome of the collaboration between the Sustainability Office and two Laboratories of the Department of Architecture and Urban Studies: TRASPOL (Research Centre On Transport Policy) and Maud Lab (Mapping and Urban Data Lab).

Within this general framework, an analysis on the bike trips collected through the survey has been carried out to highlight the main spatial patterns of home-university bike trips for the Politecnico community.

We have selected the trips made by bicycle as the only or last means of transport and we aggregated all the specific origins to the spatial microzones provided by the Milan Agency for Mobility (AMAT) to obtain fairly disaggregated clusters of bike trips within the city. Outside Milan, origins are aggregated at the municipal level.
Two maps, one for each Campus, have been produced. They show the overall number of people using bicycles to go to the Politecnico and the shortest routes connecting their area of residence to the university are represented. The shortest routes have been calculated on the road graph by using the Openstreetmap based services provided by OpenRouteService which is an online route planning application fully integrated within Qgis, based on open- source software and open data.

The shortest route is not necessarily the one followed by users; however, it identifies the minimum distance route that would reasonably be followed if it had an adequate level of security and/or attractiveness.

The Politecnico Campuses attract cycling trips of several kilometres along city routes, up to some routes arriving from more distant municipalities. In fact, it is estimated that in 2019 staff cycled almost 1,900,000 km to/from the University’s Milan campuses, a value that for students is over 3,400,000 km.
It is easy to see how the routes converge on the main access routes of the two campuses highlighting some directions widely used by cyclists. These routes would therefore be those on which to invest primarily, following backwards the ramifications of the most relevant flows. Alternative routes may be considered, as long as they deviate little from the shortest route and offer clear advantages in terms of comfort and safety. Openstreetmap based tools gave us the opportunity to visualize these directions and to use maps as an instrument to support future mobility policies. Further investigations will be related to the analysis of travel by other means of transport to identify the potential modal shift towards active and sustainable mobility, i.e. by promoting actions aimed at increasing the number of bike trips instead of travel by motorized vehicle.

This site uses Akismet to reduce spam. Learn how your comment data is processed.

This website uses cookies to improve your experience while you navigate through the website. Out of these, the cookies that are categorized as necessary are stored on your browser as they are essential for the working of basic functionalities of the website. We also use third-party cookies that help us analyze and understand how you use this website. These cookies will be stored in your browser only with your consent. You also have the option to opt-out of these cookies. But opting out of some of these cookies may affect your browsing experience.
SAVE & ACCEPT